The Powerplant Fire Penetration test is used to determine the capability of components and constructions to control the passage of fire in powerplant (engine) compartments. It is most commonly used to show compliance with "fire resistant" and "fireproof" requirements as defined in 14 CFR 1.1. 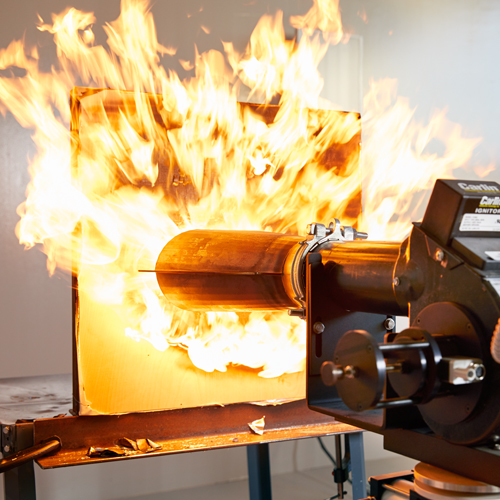 Note 2: The European Union Aviation Safety Agency (EASA) uses similar Certification Specifications (CS) which correspond to those in the CFR. For example, the EASA regulations are listed as CS 23.1182, CS 25.1191, etc. These regulations may also be referred to as "JAR" (Joint Aviation Requirements) and listed as JAR 23.1182, JAR 25.1191, etc.

In 1947, the U.S. Civil Air Authority (CAA) issued Safety Regulation Release (SRR) No. 259 to provide approved test methods to be used in demonstrating compliance with fire and flammability requirements. Flight Standards Service Release (FSSR) No. 453 superseded SRR No. 259 in 1961 pending incorporation of appropriate test procedure in the Civil Aeronatuics Manuals. Both the SRR and FSSR releases contained a fireproof test and two different types of fire-resistant tests, among others. In 1961, the CAA issued Power Plant Engineering Report No. 3, which provided a standard burner and other equipment to test hose assemblies under simulated conditions. The test aimed at producing a typical aircraft powerplant fire, with similar vibration, fluid flow, pressure, and temperature as would be encountered during rough engine operation. The Federal Aviation Administration (FAA), which was established in 1965 to replace the CAA, revisited and revised this test method to Power Plant Engineering Report No. 3A.

Since the issuance of the Civil Air Regulations in 1946 and the superseding federal regulations in 1962, the fire safety requirements were defined with the terms "fire resistant" and "fireproof" as follows:

(1) With respect to sheet or structural members, means the capacity to withstand the heat associated with fire at least as well as aluminum alloy in dimensions appropriate for the purpose for which they are used; and

(2) With respect to fluid-carrying lines, fluid system parts, wiring, air ducts, fittings, and powerplant controls, means the capacity to perform the intended functions under the heat and other conditions likely to occur when there is a fire at the place concerned.

(1) With respect to materials and parts used to confine fire in a designated fire zone, means the capacity to withstand at least as well as steel in dimensions appropriate for the purpose for which they are used, the heat produced when there is a severe fire of extended duration in that zone; and

(2) With respect to other materials and parts, means the capacity to withstand the heat associated with fire at least as well as steel in dimensions appropriate for the purpose for which they are used.

One problem with these definitions is that they do not specify heat intensity, temperature levels, duration, or an appropriate wall thickness for the purpose intended. In order to simplify the requirements, the FAA issued Advisory Circular AC 20-135 in 1990 to provide guidance to manufacturers on demonstrating compliance with the powerplant fire protection regulations. This advisory circular includes methods and rationale for fire testing of various equipment. For the purpose of AC 20-135, the terms "fire resistant" and "fire proof" were defined as follows:

When applied to powerplant installations such as fluid-carrying lines, flammable fluid system components, wiring, air ducts, fittings and powerplant controls, “fire resistant” means the capability of a material or component to perform its intended functions under the heat and other conditions likely to occur at the particular location and to withstand a 2000°F flame (±150°F) for 5 minutes minimum.

The capability of a material or component to withstand, as well as or better than steel, a 2000°F flame (±150°F) for 15 minutes minimum while still fulfilling its design purpose. The term “fireproof”, when applied to materials and parts used to confine fires within designated fire zones, means that the material or part will perform this function under conditions likely to occur in such zones and will withstand a 2000°F flame (±150°F) for 15 minutes minimum.

AC 20-135 also specifies a burner and flame condition to standardize the test. The burner types allowed are specified in Powerplant Engineering Report No. 3A. These kerosene burners must produce a 2000°F temperature within 1/4-inch of the specimen and engulf or provide representative impingement coverage, dependent on the specimen size. In addition, the burner must provide a heat flux density of at least 9.3 BTU/ft2-sec using a calorimeter or 4500 BTU/hr using the BTU Heat Transfer Device. Propane burners are no longer acceptable for use in AC 20-135 testing.

In order to facilitate improvements to the test standard without constantly changing the CFR, the FAA published Report DOT/FAA/CT-99/15 "Aircraft Materials Fire Test Handbook" in 1990. The handbook was updated in 2000 to DOT/FAA/AR-00/12, with the Powerplant Fire Penetration tests located in Chapters 11 and 12 of the handbook. These test methods are not typically an acceptable method for showing compliance with the regulations. To show compliance with federal regulations, the requirements of Advisory Circulars AC 20-135 or AC 33.17-1 should be followed.