The Insulation Burnthrough test is used to evaluate the burnthrough resistance characteristics of thermal and acoustic insulation material when exposed to a high-intensity open flame. It is most commonly used to show compliance with 14 CFR 25.856(b). 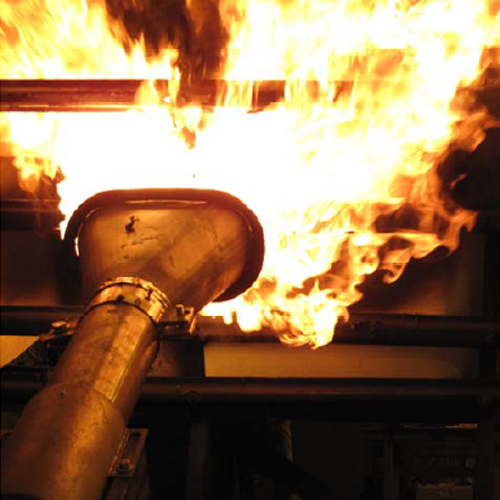 A test sample consisting of two insulation blankets is placed onto a test fixture at an angle of 60 degrees. The sample is exposed to a high-intensity open flame for four minutes. The pass/fail criteria are based on flame penetration and a maximum heat flux value on the backside of the sample.

Note 1: In the aviation industry, 14 CFR may also be referred to as "FAR" (Federal Aviation Regulations). You may see the requirements listed as FAR 25.856, etc.

Note 2: The European Union Aviation Safety Agency (EASA) uses similar Certification Specifications (CS) which correspond to those in the CFR. For example, the EASA regulations are listed as CS 25.856, etc. These regulations may also be referred to as "JAR" (Joint Aviation Requirements) and listed as JAR 25.856, etc.

Thermal insulation and acoustic insulation in transport category airplanes with a passenger capacity of 20 or greater require the Insulation Burnthrough test. This requirement only applies to thermal/acoustic insulation material installed in the lower half of the airplane fuselage.

History of the Insulation Burnthrough Test

Based on this research, a small-scale test method was developed using a modified kerosene oil burner, similar to those used for the Oil Burn for Seat Cushions and Oil Burn for Cargo Liners tests. This test method realistically simulated the thermal characteristics of a post-crash fire. The test stand and specimen were configured to simulate a small section of fuselage frames and stringers, with insulation material mounted over them. Fuselage skin was not represented in this test, since the delay in burnthrough afforded by the skin is not directly related to the performance of the insulation, and the test was intended to measure the performance of the insulation itself. In 2003, the FAA issued a Final Rule which added 14 CFR Part 25, Section 25.856 to the federal regulations. This section required thermal and acoustic insulation materials in the fuselage of transport category airplanes to meet more stringent test requirements. Part VII was added to 14 CFR Part 25, Appendix F to include the newly developed test method for determining the burnthrough characteristics of thermal/acoustic insulation materials.

In order to facilitate improvements to the test standard without constantly changing the CFR, the FAA published Report DOT/FAA/CT-99/15 "Aircraft Materials Fire Test Handbook" in 1990. The tests in this handbook are considered an acceptable equivalent to those in the CFR. The handbook was updated in 2000 to DOT/FAA/AR-00/12, with the Insulation Burnthrough test located in Chapter 24 of the handbook.