The Vertical Bunsen Burner test is used by the aerospace/aviation industry to determine the resistance of cabin and cargo compartment materials to a flame applied for either 12- or 60-seconds. It is most commonly used to show compliance with 14 CFR 25.853(a). 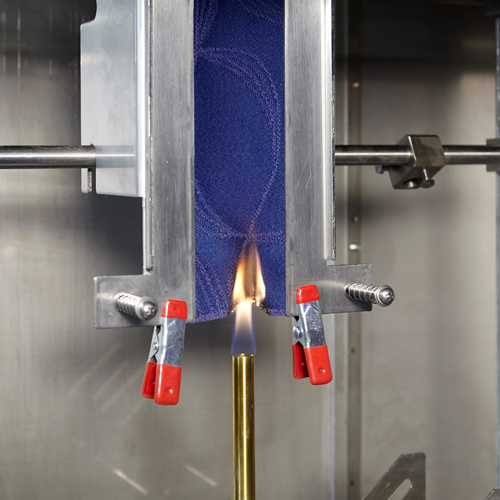 A test sample is aligned vertically and exposed to a small Bunsen burner flame at its lower edge. The flame is applied for 12 or 60 seconds and then pulled away from the sample. If the sample continues to flame, this flame time is recorded along with any flaming drips that may occur. After the test is over, the burn length is measured. The pass/fail criteria are based on the flame time, drip flame time, and burn length averaged across three test samples.

Items in commuter or transport category aircraft and in transport category rotorcraft require the Vertical Bunsen Burner Test when they are located in a compartment occupied by the crew or passengers. While there are some exceptions, these items typically include:

In 1965, following the deadly United Airlines Flight 727 crash in Salt Lake City, the Federal Aviation Administration (FAA) proposed more stringent requirements for cabin materials which were later adopted in 1967. Prior to 1967, materials were only required to undergo a Horizontal Bunsen Burner Test. The new Vertical Burn requirements were based on the 1951 Federal Specification CCC-T-191b, Method 5902 "Flame Resistance of Cloth, Vertical" with some modifications. This modified test method was incorporated into the Code of Federal Regulations (CFR), Title 14, Part 25 in 1967 through Amendment 25-15.

The Vertical Burn test underwent a few changes since its creation in 1967. Individual manufacturers and organizations also established their own internal versions of the Vertical Burn Test, such as Airbus (ABD0031/AITM 2.0002), Boeing (BSS 7230), McDonnell Douglas (DMS 1510 and 1511), and ASTM International (ASTM F501, withdrawn in 1998).

In order to facilitate improvements to the test standard without constantly changing the CFR, the FAA published Report DOT/FAA/CT-99/15 "Aircraft Materials Fire Test Handbook" in 1990. The tests in this handbook are considered an acceptable equivalent to those in the CFR. The handbook was updated in 2000 to DOT/FAA/AR-00/12, with the 60-second and 12-second Vertical Bunsen Burner Tests located in Chapter 1 of the handbook.