The Insulation Flame Propagation test (also referred to as the Radiant Panel test) is used to determine the flammability and flame propagation characteristics of thermal and acoustic insulation when exposed to both a radiant heat source and a flame. It is most commonly used to show compliance with 14 CFR 25.856(a). 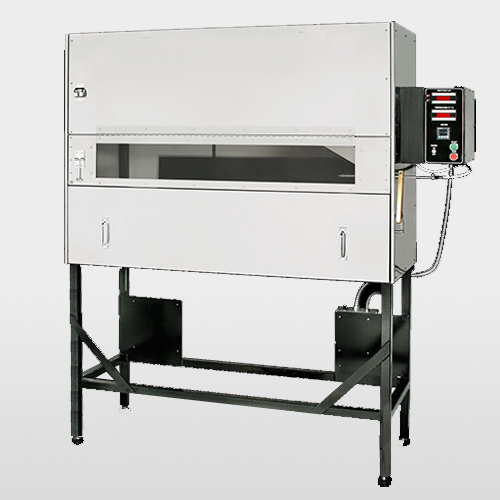 A test sample is placed horizontally into a chamber and exposed to both a radiant heat source and direct flame for 15 seconds. Flame time, burn length, and flame propagation are recorded. The pass/fail criteria are based on the flame time and burn length.

Note 2: The European Union Aviation Safety Agency (EASA) uses similar Certification Specifications (CS) which correspond to those in the CFR. For example, the EASA regulations are listed as CS 23.856, CS 25.856, etc. These regulations may also be referred to as "JAR" (Joint Aviation Requirements) and listed as JAR 23.856, JAR 25.856, etc.

In November of 1993, a fire occurred in a McDonnell Douglas MD–87 airplane while it was taxiing in from a landing at Copenhagen, Denmark. The fire was found to have been initiated by an electrical fault behind a sidewall, but investigators later determined that the insulation materials contributed to the propagation of the fire. Between 1994 and 1995, the Civil Aviation Authority of China reported three incidents involving McDonnell Douglas and Boeing airplanes. In each of those cases, physical damage to the airplane was minimal, but there was clear evidence that the fires had propagated on the insulation. At the time, only the Vertical Bunsen Burner Test was required for insulation material.

As a response to these incidents, the FAA conducted a review of both the 14 CFR Part 25 Appendix F test methods, and a "cottonswab" test method used by certain segments of the industry to assess the flammability of thermal/acoustic insulation (Ref. FAA Report DOT/FAA/AR–97/58, "Evaluation of Fire Test Methods for Aircraft Thermal Acoustical Insulation"). This test program showed that the "cotton-swab" test did provide better discrimination among materials than did the existing Bunsen burner certification test method. However, full-scale fuselage testing performed at the FAA Technical Center showed that there were materials that could pass the cottonswab test but still propagate a flame in a large-scale environment. Based on these results, the FAA concluded that there was no effective test method that represented material behavior under full-scale test conditions. It was determined that a new test method was required.

The FAA conducted a series of small, medium, and full-scale tests with various insulation materials. These tests identified various characteristics of these materials that were significant as to whether or not the materials would spread a fire from an otherwise small ignition source. In particular, the FAA found that a piloted controlled ignition under conditions of radiant heat tends to predict the materials’ performance in a full-scale fire. Based on this research, the FAA adapted American Society of Testing and Materials (ASTM) test method ASTM E648, which uses a modest ignition source combined with exposure to radiant heat, to determine fire propagation performance. This radiant panel test was originally developed to qualify flooring, but lent itself very effectively to insulation materials. The FAA added a calibration method that imposed representative heat flux, as derived from full-scale tests, on the insulation materials. In 2003, the FAA issued a Final Rule which added 14 CFR Part 25, Section 25.856 to the federal regulations. This section required thermal and acoustic insulation materials in the fuselage of transport category airplanes to meet more stringent test requirements. Part VI was added to 14 CFR Part 25, Appendix F to include the newly developed radiant panel test method for determining the flammability and flame propagation characteristics of thermal/acoustic insulation materials.

In order to facilitate improvements to the test standard without constantly changing the CFR, the FAA published Report DOT/FAA/CT-99/15 "Aircraft Materials Fire Test Handbook" in 1990. The tests in this handbook are considered an acceptable equivalent to those in the CFR. The handbook was updated in 2000 to DOT/FAA/AR-00/12, with the Insulation Flame Propagation (Radiant Panel) test located in Chapter 23 of the handbook.