The Oil Burn for Seat Cushion test, also known as the Fireblock test, is used to determine burn resistance and weight loss characteristics of seat cushions when exposed to a high-intensity open flame. 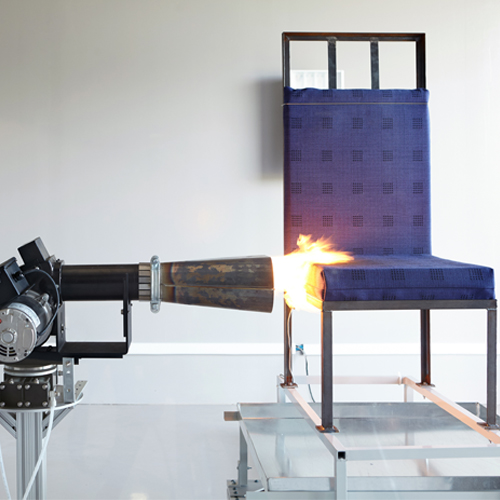 A sample consisting of both a bottom and back cushion is placed on the seat frame test fixture. The sample is exposed to a high intensity open flame for two minutes. After the test is completed, the weight loss is calculated and the burn lengths on the four faces of the cushions are measured. The pass/fail criteria are based on the weight loss and burn lengths averaged across three test samples.

For an in-depth guide to constructing the seat cushion test samples, take a look at our guide How to Build Seat Cushion Fireblock Test Samples.

History of the Oil Burn for Seat Cushion (Fireblock) Test

Following a number of incidents during the 1970s in which fatalities occurred as a result of postcrash fires, the Federal Aviation Administration (FAA) established the Special Aviation Fire and Explosion Reduction (SAFER) Advisory Committee in 1978. The SAFER committee was directed to "examine the factors affecting the ability of the aircraft cabin occupant to survive in a post-crash environment." The committee provided findings and recommendations to many different issues, one of which was the development of a fire blocking layer for seat cushions as a means of slowing flame spread.

Seat cushions on aircraft make up a large fuel mass in the event of a fire. Although these materials were already required to pass the Vertical Bunsen Burner Test, in a full-scale cabin fire the large volume of foam allowed flames to spread quickly and produced vast amounts of smoke and combustible gases. The FAA began to research potential fire blocking concepts. One phase of this research program developed a test for evaluation and certification of cushions using a 2 gallon per hour kerosene burner. This burner was currently used for testing hose assemblies, tubing, and similar components.

Following this research, the FAA issued Notice of Proposed Rulemaking (NPRM) No. 83-14 to establish additional flammability requirements for seat cushions used in transport category aircraft. This was incorporated into federal law one year later in 1984 when the final rule was issued. This final rule established new flammability requirements for aircraft seat cushions on transport category aircraft and rotorcraft. 14 CFR 25.853 was amended to add paragraph (c) and 14 CFR 29.853 was amended to add paragraph (b). Both paragraphs required seat cushions to meet the requirements added into the newly formed 14 CFR 25, Appendix F, Part II.

In order to facilitate improvements to the test standard without constantly changing the CFR, the FAA published Report DOT/FAA/CT-99/15 "Aircraft Materials Fire Test Handbook" in 1990. The tests in this handbook are considered an acceptable equivalent to those in the CFR. The handbook was updated in 2000 to DOT/FAA/AR-00/12, with the Oil Burn for Seat Cushion (Fireblock) Test located in Chapter 7 of the handbook.