The Horizontal Bunsen Burner test is used by the aerospace/aviation industry to determine the resistance of cabin and cargo compartment materials to a flame applied for 15-seconds. It is most commonly used to show compliance with 14 CFR 25.853(a) or CAR 3.388(a). 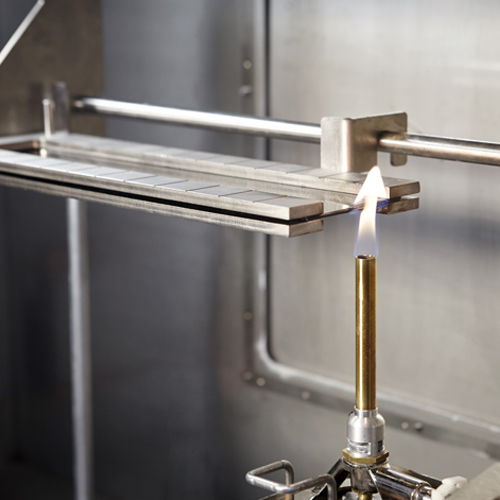 A test sample is aligned horizontally and exposed to a small Bunsen burner flame at one edge. The flame is applied for 15 seconds and then pulled away from the sample. The rate of flame travel across the sample is measured between two points. The pass/fail criterion is based on the burn rate averaged across three test samples.

All items in normal category aircraft and rotorcraft require the Horizontal Bunsen Burner Test when they are located in a cargo compartment or a compartment occupied by the crew or passengers.

Some items in transport category aircraft and rotorcraft require the Horizontal Bunsen Burner Test when they are located in a cargo compartment or a compartment occupied by the crew or passengers. While there are some exceptions, these items typically include:

In 1949, the Civil Aeronautics Board (CAB) issued Civil Air Regulation (CAR) Part 3 for Normal, Utility, Acrobatic, and Restricted Category Airplanes. Section 3.388(a) required at a minimum for flash-resistant materials to be used in cabin interiors, and flame-resistant materials when smoking was permitted. CAR Part 4b (Transport Category Airplanes), CAR Part 6 (Normal Category Rotorcraft), and CAR Part 7 (Transport Category Rotorcraft) were released in the following years with similar requirements. The term "flash-resistant" was originally defined as materials "which would not support combustion to the point of propagation, beyond safe limits, a flame after the removal of the ignition source." The term "flame-resistant" was originally defined as materials "which will not burn violently when ignited." To provide acceptable test methods for demonstrating compliance with these regulations, the CAB issued Safety Regulation Release No. 259 in 1947. This was replaced by Flight Standards Service Release (FSSR) No. 453 in 1961 after the Federal Aviation Administration (FAA) replaced the CAB. The Horizontal Bunsen Burner test methods were similar to those found in Federal Specification CCC-T-191b, Method 5902, which was originally issued for government procurement purposes.

The Civil Air Regulations (CARs) were replaced by the Federal Aviation Regulations (FARs) in 1965. The FARs can be found in Title 14 of the Code of Federal Regulations (CFR). The initial release used the same terminology as the previous CAR regulations with "flash-resistant" and "flame-resistant" requirements. The Horizontal Bunsen Burner Test requirements carried on into the new regulations through FSSR No. 453.

In 1967, the FARs were updated to create a Vertical Bunsen Burner Test and remove references to "flash-resistant" and "flame-resistant". The new regulations required materials to be self-extinguishing and be tested to both the Vertical Burn Test and Horizontal Burn test. Appendix F was also created, which provided test procedures for both requirements.

In 1984, the FAA released Advisory Circular AC 23-2, which provided clarification and guidance by listing acceptable test methods to show compliance with the flash-resistant, flame-resistant, self-extinguishing, and other requirements. The Horizontal Burn test underwent a few changes since its creation. Individual manufacturers and organizations also established their own internal versions of the Horizontal Burn Test, such as Airbus (ABD0031/AITM 2.0003), Boeing (BSS 7230), McDonnell Douglas (DMS 1505 and 1507), and ASTM International (ASTM F776, withdrawn in 1998).

In order to facilitate improvements to the test standard without constantly changing the CFR, the FAA published Report DOT/FAA/CT-99/15 "Aircraft Materials Fire Test Handbook" in 1990. The tests in this handbook are considered an acceptable equivalent to those in the CFR. The handbook was updated in 2000 to DOT/FAA/AR-00/12, with the Horizontal Bunsen Burner Tests located in Chapter 3 of the handbook.