The Fire Containment Test of Waste Stowage Compartments is used by the aerospace/aviation industry to determine the fire containment capability of containers, carts, and compartments used to store combustible waste materials. 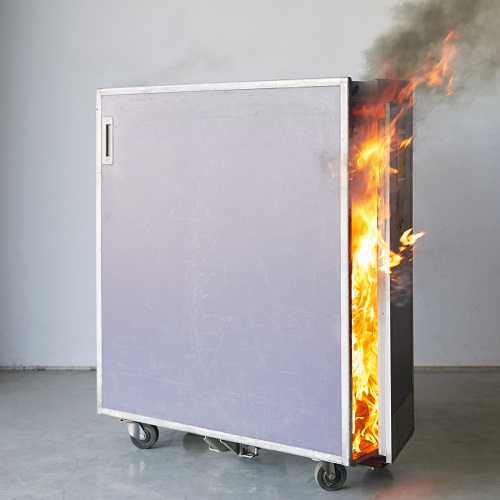 The receptacle is filled with combustible materials simulating common aircraft waste (e.g. cups, napkins, utensils, etc.). The combustible materials are ignited and the unit is closed. After the resulting fire dies out, the test is terminated and the unit is examined for damage. The receptacle must contain the fire and prevent flames from escaping.

The unit to be tested is typically equivalent to the actual production unit.

History of the Fire Containment Test of Waste Stowage Compartments

In 1953, the Civil Aeronautics Board issued Civil Air Regulation (CAR) Part 4b for Airplane Airworthiness of Transport Categories. Section 4b.381 "Cabin Interiors", section (d) stated that "All receptacles for used towels, paper, and waste shall be of fire-resistant material, and shall incorporate covers or other provisions for containing possible fires." The term "fire resistant" was defined at the time as:

With respect to sheet or structural members, means the capacity to withstand the heat associated with fire at least as well as aluminum alloy in dimensions appropriate for the purpose for which they are used.

In 1947, the U.S. Civil Air Authority (CAA) issued Safety Regulation Release (SRR) No. 259 to provide approved test methods to be used in demonstrating compliance with fire and flammability requirements. Flight Standards Service Release (FSSR) No. 453 superseded SRR No. 259 in 1961. Both the SRR and FSSR releases contained a test method to show compliance with the "fire resistant" requirement of CAR 4b.381. In 1965, when the regulations were recodified into 14 CFR Part 25, the requirements carried forward into section 25.853(d).

In 1991 the FAA issued Advisory Circular (AC) 25-17 "Transport Airplane Cabin Interiors Crashworthiness Handbook" which provided acceptable certification methods for demonstrating compliance with the crashworthiness requirements of 14 CFR Part 25. This AC provided an acceptable test method for demonstrating fire containment of containers, carts, and compartments. The AC defined "fire resistant" compliance as meeting the 45-degree burn test and by containing the fire described in this test procedure. This AC was amended to AC 25-17A in 2009, and included this same test procedure in Appendix 8 of the AC.

In order to facilitate improvements to the test standard without constantly changing the CFR, the FAA published Report DOT/FAA/CT-99/15 "Aircraft Materials Fire Test Handbook" in 1990. The tests in this handbook are considered an acceptable equivalent to those in the CFR. The handbook was updated in 2000 to DOT/FAA/AR-00/12, with the Fire Containment Test of Waste Stowage Compartments located in Chapter 10 of the handbook.